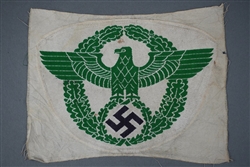 SOLD VERY RARE Original WWII German POLICE Sports Shirt Brought Home By A U.S. Veteran Certified. Physical fitness of its personnel was a prime concern of the German police and each new recruit was issued a specific sport uniform that consisted of a pullover "tank top" style shirt, navy blue or...

Chet Blaze said:
Yeah, it's a Police Sports Badge. Thank you all for your information. I know that my grandpa brought it back from WWII so it's legit. It looks like it was cut off of the shirt with a knife or just torn off. Either way, it's pretty cool, other than the link to what those bastards did. My brother told me that there are supposed to be other "souvenirs" in a box that we've yet to find. Can't wait to find it and see what grandpa brought back.
Click to expand...

Most of my grandpa's "souvenirs" went way before I came along. As I understand it, he brought back a P. 38, a Mauser with a bayonet, and a Nazi canteen. The canteen was covered in grey felt, with a red, white and black felt swastika on it. It was given to the soldier by someone, but the writing is obscured with blood.

The story is that grandpa lost his rifle seeking cover during a mortar attack, landed in a foxhole with a German who was doing the same, and managed to grab the guys rifle and bash his teeth in with it. He left the foxhole with an enemy rifle and his water supply.

The Mauser was traded for beer in the '50s. The P. 38 was traded for work of some kind. The bayonet was used as a pry bar at one point, broken, and then ground into a knife. It's in one of my dad's tool boxes. The canteen is in my dad's gun safe.

mouser9 said:
Too bad Pale!! Wish ya could have inherited those items. A P-38 and a 98k would be some valuable items in todays world plus great heirlooms. Things different back in the 50s.
Click to expand...

Well, in consolation, I do have my great grandfather's WWI souvenirs. He gave his war trophies to his three oldest grandchildren; dad got the stuff from when he fought in Germany, one of dad's first cousins got the loot from his time in the Expeditionary Force in Russia, and his other cousin got the Phillipines/Moro stuff. All three have passed on, and I wonder what happened to the Russian and Philippine stuff.
1 - 4 of 4 Posts
About this Discussion
11 Replies
5 Participants
Last post:
PaleHawkDown 2 d ago
Gun and Game Forum
A forum community dedicated to hunters and enthusiasts. Come join the discussion about optics, trails, clubs, gunsmithing, styles, reviews, accessories, classifieds, and more. The friendliest gun forum on the Internet!
Full Forum Listing
Explore Our Forums
Mosin Nagant General Semi-Automatic Handgun Discussion General Reloading General Rifle Discussion Survival Discussions